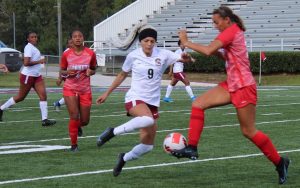 COLUMBIA, SC (October 22, 2021) —The South Carolina State women’s soccer team posted their first win of the season in a 9-1 win over host Allen University at the Southeastern Freight Sports Complex.

The Lady Bulldogs (1-11) played solid on the offensive throughout most of the game. SC State posted five goals in the first half, striking first on a goal straight up in middle by Alaysia Grose in the 10-minute mark.

Brionna Mack, the winning goalie, gain an impressive 10 shots with two goals and seven shots on goal at mid-field during the contest. Olivia White gained 10 shots with one goal, while Fabienne Balvers and Faith Sparks both posted 7 shots, with one goal and one assist respectfully. Karli Williams finished three shots and gained her first goal of the season.

South Carolina State finished at 27-of -56 shots on goal.

The Lady Bulldogs travel to Dover, DE to take on Delaware State in a match-up Sunday (Oct. 24th). First kick is 2 p.m.