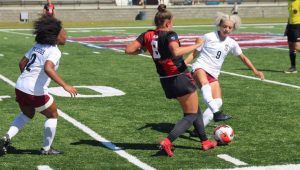 With the loss, the Lady Bulldogs falls to 0-11 overall, while Delaware State improves to 2-10 on the season.

SC State was very aggressive from the start, scoring their first goal at the 17th minute mark in the first half with Alaysia Grose kicking from the right side up the middle.

After intermission in the second half, SC State turned up its defense holding Delaware St. scoreless until the 58th minute mark with Gabriela Cabera scoring the Hornets first goal with an assist by Ashley Ventura.

DSU’s Lynette Urena goal up the middle at the 83rd minute mark secured the 2-1 victory for the Hornets.

Kierra Cox (Denver, CO), the goalie, had a total of 12 saves averaging a total of 33 saves this season.

“We continued to play hard and press on the other team defensively on today” said head Coach Horne. “The girls have heart and with all 11 players and no subs, the most important thing is that they never gave up”.

The Lady Bulldogs return to action on a two game road series with first stop on Wednesday, Oct 20 as they take on Allen University in Columbia, SC with first kick at 3:30 p.m. and to Dover, DE on Sunday, October 24, 2021, to take on Delaware State in a 2:00 p.m. start.