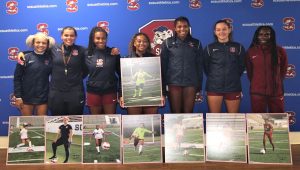 Eight (8) seniors played their final collegiate contest in a Lady Bulldogs uniform were honored in a pregame ceremony, prior to the start of the contest.

Despite the rainy weather, South Carolina State played lights out attempting 18 shots in the first half and 23 in the second half finishing a total of 41 on the night.

Junior forward Kayla Miller-People finished with a season-best five (5) goals on the night, while senior captain Kierra Cox added three (3) in the win.

First-year head coach Patrick Horne closed out the season with an 2-11-1 overall record, completing a season sweep of Allen.