Williams To Be Featured In HBCU All-Star Game Sunday NEW ORLEANS (April 1, 2022) – Graduate forward Deaquan Williams will be one of many featured in the first ever HBCU All-Star Game, taking place on Sunday, April 3 during Final Four weekend in New Orleans at the UNO Lakefront Arena at 4 pm ET.

Williams will be among the nation’s top 24 players who will make up the two rosters for the inaugural contest.

The game will air live on the CBS Television Network and be available to stream on Paramount+. 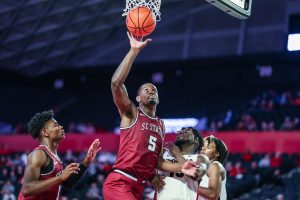 Williams (6-8, 215-Forward), a graduate transfer from Lincoln University (PA), the Camden, NJ native provided that much needed veteran leadership in the frontcourt for the Bulldog this past season, as well uplifting them to one of the top rebounding teams in the nation. He played and started in all 31 games averaging 6.2 points, 6.2 rebounds, with 20 steals and 18 blocks in 20.5 minutes played while scoring his 1,000th career point earlier this season versus Loyla (MD).

The game is comprised of some of the best basketball players in the four HBCU NCAA Division I and II conferences in the country and backed by the official sponsor of the HBCU All-Star Game, Aflac, the 24 selections will be split up into two teams of 12 for the historic game, named after a pair of HBCU legends in John McLendon and Clarence “Big House” Gaines.

“The 24 players that have been selected represent the best in college basketball at our country’s prestigious black colleges and universities. Our HBCU All-Stars national scouting staff did an amazing job for the past three months evaluating some of the most talented players from the 48 HBCUs. We know there were many players deserving of the opportunity to play in this game,” said HBCU All-Stars LLC Founder and CEO Travis L. Williams. “This is history in the making and has been a long journey to get to this point, but we are just getting started and expect to put on a great event with our amazing CBS Sports partners and HBCU All-Stars staff in New Orleans.”

With a mission to advocate, educate, expose, mentor and invest in HBCU student-athletes and coaches across the country, the event aims to showcase the best in Black college basketball. Launched by HBCU All-Stars LLC, a Black-owned sports marketing and events company in Atlanta, the HBCU All-Star Game brings much needed exposure, visibility and recognition to outstanding, talented and hardworking HBCU student-athletes and coaches.

To learn more about the HBCU All-Star Game and to get additional information about its ancillary events and tickets visit hbcuallstargame.com and follow @hbcuallstargame.

###
About HBCU All-Stars, LLC
HBCU All-Stars, LLC is headquartered in Atlanta, Georgia and was founded in 2019 with the mission to advocate, educate, expose, mentor and invest in hardworking, talented, ambitious student-athletes and brilliant coaches at our distinguished Historically Black Colleges and Universities. Along with its mission the company also launched the first-ever HBCU All-Star Game and ancillary experiences and events surrounding the historical endeavor during the Final Four Men’s Basketball National Championship Tournament.