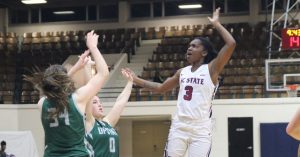 Nadia Reese and Shania Wright both finished with eight points respectfully in the loss. Victoria Jordan grabbed a team-high eight rebounds on the day.

Western Carolina was led by Endia Holliday with a game-high 21 points in the win.

UP Next for SC State
South Carolina State will hit the road to take on Wake Forest  on Wednesday, Dec. 15th , before heading to play in the Mississippi State Tournament Dec. 18th-20th in Starkville, MS.