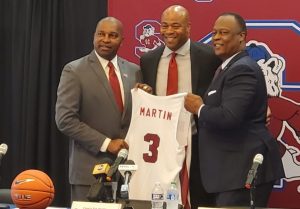 “Coach Martin is — without a doubt –a rising star in the men’s basketball coaching world,” Danley said. “He has an excellent pedigree after playing and working for Hall of Fame head coach Bob Huggins (at West Virginia University) and is well prepared to assume the position of head men’s basketball coach for our program.

“During the search process, Coach Martin exuded an infectious will to win and the ability to develop a culture where winning will be expected on and off the court,” the athletic director said. “I’m confident that he will represent our university in exemplary fashion, and we are undoubtedly well-positioned for success moving forward as one of college basketball’s elite programs under Martin’s leadership.
“I am absolutely thrilled for Erik to join Bulldog Athletics as we prepare to embark on the next chapter of our program,” Danley said.

Martin was named to The Athletic sports website’s list of “25 College Basketball Assistants Ready to Lead Their Own Program” in 2020 and “30 Coaches to Watch” in 2018.

Erik Martin
“I’m so excited to be the next head coach at South Carolina State,” Martin said. “It has always been my dream to lead a Division I program as well as guide young men on and off the court as they prepare to graduate and move on to the next phase of their lives. It’s a great day to be a Bulldog.”

With over 20 years of coaching experience, Martin is in his 17th season as a Division I coach. He most recently served 16 seasons as an assistant coach under Huggins at West Virginia.

While at West Virginia in 2007, the Mountaineers won the 2010 Big East Championship and have advanced to 10 NCAA Tournament appearances, including the 2010 Final Four and five NCAA Sweet 16s. Martin has helped guide the Mountaineers to 326 victories.

At West Virginia, Martin was responsible for post player development as well as assisting with game scouts, recruiting, along with scheduling, camps, fundraising and community appearances.
During Martin’s tenure in Morgantown, his impact has extended into the community:

From 2007-19, he organized the United Way Clinic in Fairmont, W.Va., which paired WVU newcomers with youth from the Fairmont area.

In 2021, he established a non-profit foundation, Helping Hand Charities WV, a mission of aiding children from single-parent homes as well as underprivileged youth.

Coach Martin’s community involvement is a direct reflection of his passion for working with youth and connecting them with the WVU community.

Prior to West Virginia, Martin spent a year as an assistant at Kansas State with Huggins. Before that, he spent two years as an assistant coach at Cincinnati State and Technical College in Cincinnati for head coach Andre Tate from 2004-06.

Martin jumped into the coaching ranks at Jacobs Center High in Cincinnati, where he served as the junior varsity coach and assistant varsity coach from 2003-04.

As a player, Martin signed with TCU out of high school and redshirted as a true freshman in 1989-90. He transferred to Santa Ana (California) Community College for one season before moving to Cincinnati the next two seasons. A standout power forward, Martin was a two-year letterman and one-year starter for Huggins at Cincinnati from 1991-93.

In his senior year, Martin guided Cincinnati to the NCAA Tournament where the fourth-ranked Bearcats lost in overtime to eventual national champion North Carolina in the East Regional finals.

The team’s leading rebounder and second-leading scorer, Martin led the Great Midwest Conference in field goal percentage and was named to the all-conference second team. He was a member of the league’s All-Tournament squad after guiding Cincinnati to its second straight title. Martin continued his stellar performance in the NCAA Tournament, where he was named to the East Regional all-tournament team.

Following his playing career at Cincinnati, Martin spent nine years playing professional basketball around the world, including a four-year stint with various franchises in the Continental Basketball Association and five years overseas.

In addition to his professional experience, Martin has also spent time with the U.S. National team, helping the squad to a silver medal at the 1995 Pan American Games in Argentina. Martin also assisted USA in winning the gold medal at the 1997 Tournament of the Americas.

Martin earned his associate of arts degree from Santa Ana Community College in 1990 and a bachelor’s degree in criminal justice from Cincinnati in 1993.

A native of West Covina, California, Martin has three daughters, Amiyah, Eleyna and Erika. He married the former Anita Woodley in 2010.

Both the men’s and women’s basketball candidate searches at SC State were assisted by CarrSports Executive Search and Consulting.