Two Bulldog Greats and future Hall of Famers Meet Up 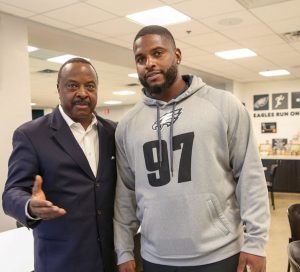 The two will be among nine (9) former SC State sports standouts inducted into the SCSU Athletic Hall of Fame Oct. 21 in a special Hall of Fame Enshrinement on the campus.

Hargrave, a former All-American and two-time MEAC Defensive Player of the Year, is in his sixth year in the National Football League, his second with the Eagles. He spent his first four years with the Pittsburgh Steelers.

Grier, one of the Bulldogs’ top golfers during his undergraduate tenure (1972-1976) earned a host of golf honors at SC State and is a member of the MEAC’s 50th Anniversary All-Time Golf Team. He is a practicing attorney in the Philadelphia area.