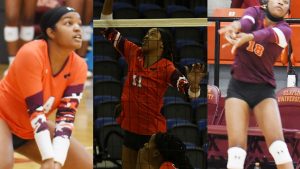 CHARLOTTE, NC – After completing one their most successful season since joining the Central Intercollegiate Athletic Association (CIAA), the honors came in for the 2021 Claflin Lady Panthers. Three members of the Lady Rams’ team earned spots on the 2021 CIAA All-Conference team.

Senior libero Trinity Fierce was the sole Lady Panther to earn first team all-conference honors. She earned the spot after leading one of the top defensive teams in the conference. She finished the season ranked second in the CIAA in digs per set with a 4.31 average. Her best performance came against Elizabeth City State when she recorded a season-high 27 digs. She also recorded 26 digs against Bluefield State with 20 digs in a win over Johnson C. Smith. She also added eight service aces and she was honored as the 2021 CIAA Defensive Player of the Year.

The Lady Panther duo of junior right side hitter Mya Broom and junior utility Simone Newell were both honored with second team all-conference team honors. Broom earned a spot at after a terrific season. She finished the season ranked second on the team and 12th in the CIAA with 161 kills. She was also impressive defensively with 50 total blocks (seven solo). Mya got her season started in a big way with a career-high 11 kills at Brewton-Parker and she also had back-to-back 10-kill matches against Bowie State and Virginia Union. Also joining Broom on the second team was fellow junior utility Simone Newell. She took home the honor as one of the best overall players in the CIAA. She finished the season with 179 kills to lead the team and she ranked 16th in the CIAA in total kills. She also ranked 16th in the conference in service aces (33). Defensively, Newell led the Lady Panthers with 246 total digs and 2.89 digs per set.  She had a pair of double-double efforts as she had 10 kills with 17 digs at Benedict along with 12 kills and 17 digs in a four-set win over Winston-Salem State.

The trio will look to lead the Lady Panthers into the post season as the team will head to Virginia State to take on the Trojans in the opening round of the 2021 CIAA Volleyball Championship Tournament.