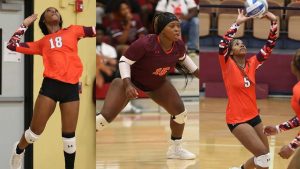 CHARLOTTE, NC (September 20, 2022) – After their third straight week of undefeated play, the honors are coming in for the Claflin Lady Panthers. On Tuesday afternoon, three Lady Panthers were named to the Central Intercollegiate Athletic Association (CIAA) Coca-Cola Volleyball Players of the Week. The honors were well after the trio led the Lady Panthers to a four-set home win over Savannah State and opened CIAA play with a road win at Livingstone.

Claflin senior outside hitter Simone Newell got things started as she was named the CIAA Food Lion Volleyball Offensive Player of the Week. She took the honor after leading the Lady Panthers in kills in both matches. She opened the week with 14 kills and eight digs against Savannah State. She followed that effort with six kills and 15 digs at Livingstone.

Lady Panthers sophomore libero Jasmine Kirkland followed the effort when she was named the Food Lion Defensive Player of the Week. She led the Lady Panthers’ defense in both match wins. She totaled 39 digs in the two matches, including a career-high 27 digs against Savannah State and 12 at Livingstone. She was also to impact the scoreboard with six total services, including a season-high four at Livingstone.

The honors weren’t limited to the upper classmen as freshman Siri Davis was named the Food Lion Rookie of the Week. She took home the honor after totaling 18 assists with seven digs, five service aces, and two kills. She recorded 12 assists against Savannah State. Against Livingstone, she added three service aces.

The Lady Panthers will return to action, Wednesday, when the team take on the Fort Valley State Wildcats in a 6:00 p.m. match. For more information on Lady Panthers volleyball, contact the Claflin University Office of Athletics Media Relations at (803) 535-5548 or log on to www.athletics.claflin.edu.