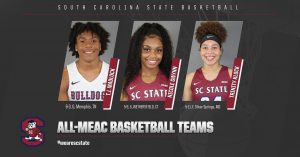 All awards, presented by TowneBank, were voted on by the league’s head coaches and sports information directors.

GWYNN (5-9, Guard, Wethersfield, CT) appeared in 27 games this season where she led the team in scoring with 11.7 points 4.4 rebounds and 1.5 assist for the Lady Bulldogs. She has earned MEAC Rookie of the Week twice, along with Player of the Week honors as well. Gwynn scored her season-high versus North Carolina Central on January 15th, 2022 tossing in 26 points.

KLOCK (5-11, Forward, Silver Springs, MD) appeared in 28 games this season and a Preseason All-MEAC Third Team selection for the Lady Bulldogs. Is 2nd on the team in scoring with 9.7 points 7.0 rebounds and 1.6 (44) blocks. Was named MEAC Player of the Week during the regular season

The 2022 MEAC Basketball Tournament begins Wednesday, March 9, and runs through Saturday, March 12, at the Scope Arena in Norfolk, Va.