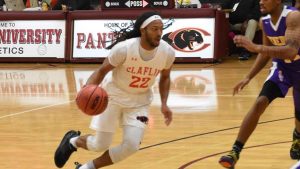 – The Claflin Panthers (2-8) played a great offensive game, but the team could not find a way to keep up with the Columbus State Cougars (8-1), Monday afternoon. The loss came despite one of the team’s best offensive performances of the season.

There was no shortage of effort for the Panthers who gave one of their best outings of the season in the loss. The team’s 81 points were the second highest point total of the season. The Panthers were led by a balanced attack in the game. The graduate duo of guards Noah Jenkins and Donnell Frayer, Jr. both scored 15 points each to lead the way for the Panthers. Senior guard Romero Hill added 14 points and a team-high five rebounds while freshman guard Michael Shuler added 13 points.

The Panthers got a slow start to the game, but the team showed some strong signs of life later in the half. After falling behind by as many as seven points early in the game, the Panthers battled back into the game when a three-point play by Jenkins tied the game, 26-26 with 5:37 left in the first half. However, the Panthers allowed a late surge by the Cougars and fell behind by as many as 10 points in the final minutes of the half. In the final seconds of the half, the Panthers staged a run of their own and cut their deficit down to just five points, 41-36.

In the second half, the Panthers once again got off to a slow start, but the team continued to make efforts to get back into the game. However, the team would not give up easily. The Panthers fell behind by as many as 12 points, 57-45 with 14:28 left in the game. The Panthers would stage a late run when a jumper from junior guard Allen Hatchett capped a 6-2 run and pulled the team to within four points, 62-68, with 10:06 left to play. In the final minutes, the Panthers would get no closer and unfortunately, they would get no closer and finished the day with the 91-81 loss.

With the loss, the Panthers fall to 2-8 on the season. The team will return to action, Thursday, when they head to Elizabeth City, North Carolina to take on the Elizabeth City State Vikings in a 7:30 p.m. game.