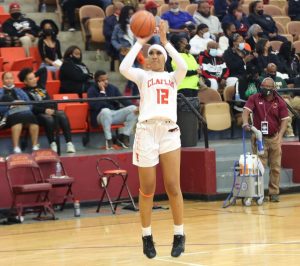 RALEIGH, NC (December 18, 2021) – The Claflin Lady Panthers (1-9, 0-2) are steadily showing improvement, but the team came up just short in a 65-62 road loss to the Shaw Lady Bears (4-6, 1-1 CIAA). After trailing for much of the game, the Lady Panthers were able to tie the game in the final minutes, but the team could not quite pull out the win in the hard-fought loss.

The Lady Panthers continue to show improvement as the team put on one of their better overall performances in recent weeks. As a team, the Lady Panthers shot a solid 38.0% (27-of-71). Freshman guard Janelle Sample continues to show why she is one of the best freshmen in the Central Intercollegiate Athletic Association (CIAA) with a team-high 19 points in the game. Junior forward Breanna Price added 14 points with 12 rebounds in the game. Fellow junior forward Destiny Colemen added 13 points with eight rebounds.

With the loss, the Lady Panthers fall to 1-9 overall and 0-2 in CIAA play. The team will return to action, Monday when they remain on the road to take on the Virginia State Trojans.