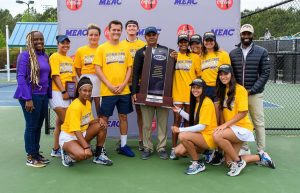 The Bulldogs won their third straight title, their 15th in the last 17 seasons and 16th all-time title.

South Carolina State earns the MEAC’s automatic bid to the 2022 NCAA Women’s Tennis Championships; the selection show will be Monday, May 2, at 6:30 p.m. live on NCAA.com.

Third-seeded South Carolina State took early control by winning the doubles point; Lasya Patnaik and Nalanda Silva opened with a 6-1 win at No. 2 doubles, and the clincher came at No. 3, where Teodora Vujicic and Anabel Aguilar were victorious, 7-6 (7-3).

Howard’s Jordan Grayson and Sifa Butcher won 6-3 at No. 1 doubles.

The Bulldogs t9-9) took control once singles play started, with Vujicic defeating Yemisi Ifederu 6-0, 6-2 at No. 3 singles and Patnaik winning 6-2, 6-2 over Butcher at No. 2 singles.