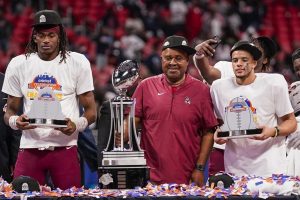 A Celebration Bowl-record 48,653 people — officially a sellout — were in attendance.

Shaquan Davis, the game’s Dennis Thomas Offensive MVP, caught three of those touchdowns. In all, he caught five passes for 95 yards. MEAC Defensive Player of the Year Decobie Durant was the Dennis Thomas Defensive MVP after recording a sack and pass defense.

The MEAC is now 5-1 all-time in the bowl game and has won each of the last four. South Carolina State (6-6) won the game on its first appearance.

“It was a wonderful win for us,” Bulldogs head coach Oliver “Buddy” Pough said. “It’s been a good week for us, and we’ve had a wonderful time here and to cap it off with this win today was the cherry on top of the sundae.”

Jackson State took a 7-0 lead in its second possession of the game, when Shedeur Sanders found Keith Corbin from seven yards at the 7:24 mark of the first quarter. But the Bulldogs scored 10 straight in the last 2:06 of the second quarter — including a 6-yard strike from Fields to Davis after the Bulldogs forced a Jackson State turnover — to go into the half up 10-7 after Gavyn Zimmerman hit a 26-yard field goal.

That momentum carried into the second half; the Bulldogs’ Kendall Moultrie intercepted Sanders on the Tigers’ first possession of the half, and South Carolina State needed just two plays before Fields found Davis again to make the lead 17-7.

Another Sanders interception on the ensuing drive — this one to Aaron Smith — set up a drive in which Fields connected with Richard Bailey from 15 yards to put the Bulldogs up 24-7.

“[Turnovers were] big,” Pough said. “We couldn’t drive the football. All of our scores were off of turnovers and us having a short field and being able to punch it in. It was really more of us using Jackson State’s gameplan against them to beat them because that’s what they’d done most of their games.”

South Carolina State then put the game away in the fourth quarter with a 9-play drive that took up more than six minutes before Fields connected with Davis for the third time in the game — this one a 16-yard score that pushed the game to its final margin.

The Bulldogs held Jackson State’s offense to just 194 total yards on the afternoon, including just 19 on the ground.