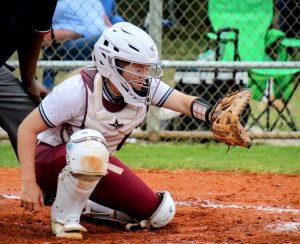 In the first game of the double-header on Saturday, the Bulldogs (2-18 overall, 1-2 MEAC) scored two runs from Kyla Reeves (Montgomery, AL) in homerun to right field in the top of the second inning and Jasmine Hogan (Blythewood, SC) who scored on a double from Kat Coe (Hartsville, SC).

NCCU (5-15 overall, 2-1 MEAC) took over the lead scoring three in the bottom of the second, while scoring seven in the fourth inning and one in the sixth to pull away with a 10-2 win.

In the final game of the series SC State put up a 6-2 lead in the top of the fourth inning where Marissa Marshall (Elk Grove, CA) scored off a ground out by Reeves. Lowther scored on a wild pitch, with Kaylah Leslie (Sunrise, FL), Hendricks, Hogan scoring from a triple by McDaniel gaining three RBI’s and McDaniel scoring off a single down right field by Marshall.

SCSU scored five runs with Reeves homering to left field bringing in Zarria Smith (Union, SC) and Marshall with two RBIs. Leslie singled to left field to gain two more runs off Hogan and Cohen to claim an 11-6 victory over the Eagles.

With the win, South Carolina State snapped a 17-game losing streak to NC Central, dating back to 2016.