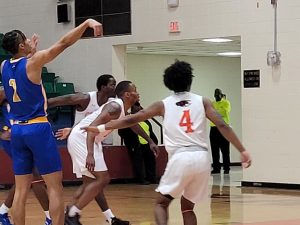 ORANGEBURG, SC (November 30, 2021) – The Claflin Panthers (1-4) could not quite keep up with the hot shooting of the Lander University Bearcats (2-4), Monday evening. After allowing a hot start to the Bearcats, the Panthers had some great runs, but the team could not quite recover in the hard-fought loss.

The Panthers were able to shake off a slow start to the game to have a solid offensive performance in the game, but the team struggled to stop the hot shooting Bearcats. Collectively, the Panthers shot a solid 38.6% (22-of-57) from the floor in the game. It was the tandem of freshman guard Richard Visitacion and senior forward Isaiah Jennings who led the way for the Panthers with 14 points each. Visitacion also pulled in a game-high seven rebounds as well. Graduate guard Donnell Frayer, Jr. also added 12 points in the game as well.

In the second half, the Panthers continued their efforts to get back into the game with an improved offensive effort. However, it was not enough for the Panthers as the team continued to struggle to stop the hot shooting Bearcats. The Panthers were able to keep things close early in the half, but the team allowed the Bearcats to pull away to take a 75-42 lead with just over six minutes left to play in the game. In the final minutes of the game, the Panthers would try to cut their deficit down 23 points, 77-54 after a lay-up from junior guard Allen Hatchett with 3:14 left to play. However, the Panthers would end the night with the 80-58 loss.

With the loss, the Panthers fall to 1-4 on the season. The team will hit the road for their next action as the team will head to Augusta, Georgia to take on the Augusta Jaguars.