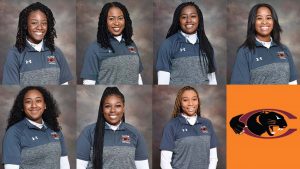 CHARLOTTE, NC (May 2, 2022) – After a dominant 2022 regular season, the honors came rolling in for the Claflin University softball team as seven Lady Panthers were named to the 2022 Central Intercollegiate Athletic Association (CIAA) All-Conference Team. In addition to earning spot on the all-conference team, Claflin graduate pitcher Bre’Zhay Chambers was named the CIAA Pitcher of the Year.

The honors didn’t stop for Chambers as she was also named the CIAA Pitcher of the Year. She earned the honor after compiling an 8-5 record and she ranked second in the CIAA with 98 strikeouts.

The Lady Panthers will begin their quest for the 2022 Central Intercollegiate Athletic Association (CIAA) Softball Championship, tomorrow morning when the team hosts Johnson C. Smith Golden Bulls in the quarterfinal round of the tournament tomorrow.