Second Half Woes Cost Panthers in 65-48 Loss at Lander 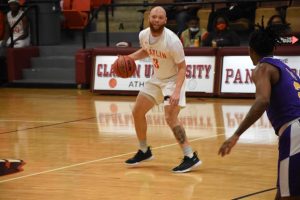 As a team, the Panthers had a solid offensive attack in the game, but they could not quite keep up with some hot shooting late by the Bearcats. The Panthers shot 32.1% (17-of-53) for the game, but they were held to just five three-pointers for the game. Claflin graduate guard Romero Hill led the way for the team with 12 points in the game. Junior guard Allen Hatchett and freshman center Marquez Ray both led the Panthers’ rebounding efforts with six rebounds each.

The second half told a different story as the Panthers fell into an early deficit that the team could not overcome. Things got tough for the Panthers early in the half as the team was outscored 21-4 in the early portion of the half and fell behind by as many as 17 points, 43-26 with 12:01 left in the game.  The Panthers had an answer, though, as the team cut their deficit down to 11 points, 47-36, with 5:53 left to play. However, the Panthers could not find a way to get their offense going in the final minutes of the game as the team ended the game with the 65-48 loss.

With the loss, the Panthers fall to 2-7 on the season.