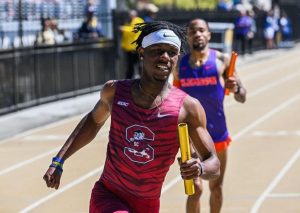 Coach Jerod Wims‘ teams won one event and combined for eleven (11) Top 5 performances in the 15-team field that included teams from several Power 5 conferences, among them the SEC and ACC.

SC State performers also set seven personal records and produced some of the best showings in the past 10 seasons.

The women’s 4×100-meter relay team (Princess Vigilance, Taryn Thorn, Ra’Necia Brown and Maya Smith) captured first place with a time of 46.35, the fastest women’s time at the university since 2015; while the 4×400-meter relay team (Thorn, Brown, Jasmaine Donovan and Debrielle Williams) was third with a clocking of 3:44.90, the best time since the 2010 campaign. Thorn also finished 10th in the 100 meters with a time of 12.25, a personal record.

In the men’s division, the 4×100-meter relay team (Waddell Rembert-Jett, Devin Brewington, Erick Hill and Brenton Shippy) was second in a time of 40.45, the eighth-fastest time in the East Region thus far; and the 4×400-meter relay team (Brewington, Jalon Kimbrough, Barrington Walker and Tyler Jeffers) was third in a time of 3:11.65, giving it a sixth-place ranking in the Region.

“Our performance was a great representation of our track program,” Wims said. “I saw what I needed to see against Power 5 competition, as our relay teams competed with Clemson and Georgia. I couldn’t ask for a better showing from our athletes this early in the season. This was really our season opener.

“We have a quite a few athletes from the Atlanta area and it was a great opportunity for their families to see what we are doing at SC State. And, as we go on the road, others will learn about our track program and what we are able to achieve here.”

SCSU continues its outdoor schedule March 25 at the two-day Weems Baskins Invite, hosted by the University of South Carolina.