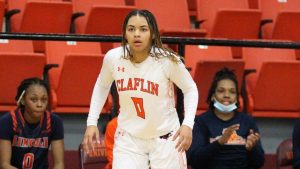 CHARLOTTE, NC (February 7, 2022) – The honors just keep coming in for Claflin freshman guard Lauren Scott as she was named the Central Intercollegiate Athletic Association (CIAA) Food Lion Women’s Basketball Rookie of the Week. After a terrific performance in powering the Lady Panthers’ offensive attack this week, she was recognized as the top rookie in the conference this week.

It was her strong offensive skills that earned the honor for Scott once again this week. She opened the week with 13 points against Saint Augustine’s, 18 points against #21 Savannah State, and six points with an assist in a road win over Livingstone. For the week, she averaged 12.3 points per game.

This week marks the second time that Scott has been honored as the CIAA Food Lion Rookie of the Week. Scott and the Lady Panthers will return to action, Thursday, when the team hosts the Winston-Salem State Rams at Tullis Arena.