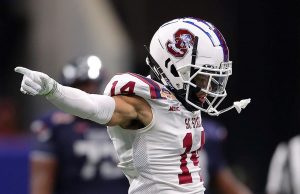 The Mid-Eastern Athletic Conference has produced some very notable defensive players over the last few years and next in line for them is South Carolina State Bulldogs cornerback Decobie Durant.

As we get closer to the 2022 NFL Draft, the Las Vegas Raiders can be the next team to draft a notable defensive HBCU prospect.

The 5-10, 180-pound cornerback might have the size to play in the slot at the next level, however, he spent most of his time on the outside, covering the opposing top receivers, and thrived over his four-year career.

“Durant might be undersized, but he plays with tremendous confidence and competitiveness. He will have issues against bigger slot targets from time to time but proved his ability against receivers of all sizes against Clemson. He plays with good foot quickness and above-average ball skills to attack the throw. He’ll be targeted in run support so he will need to be used judiciously. Durant profiles as a late Day 3 selection due to his size, but it wouldn’t be a surprise to see him outperform his draft slotting,” NFL Analyst Lance Zierlein said.

While there wasn’t an HBCU player drafted in last year’s NFL Draft, Durant and a few others are destined to change that narrative.

SCSU has had eight players drafted to the NFL since 2000.

The most recent and successful Bulldogs of them all was linebacker Darius Leonard, who went in the second round of the 2018 NFL Draft.

Durant did not allow a receiver to go over 100 receiving yards or score more than one touchdown in a single game.

The SCSU product stood out in the game against Clemson last fall. Where he intercepted quarterback D.J. Uiagalelei twice and added a pair of pass breakups and three tackles.

In 2021, Durant was named MEAC Defensive Player of the Year and earned AP FCS All-American honors, participating in the East-West Shrine Bowl in Las Vegas and being one of four HBCU prospects invited to the NFL Combine.

Having a great performance at the All-Star game, he further impressed scouts with his 4.38-second 40-yard dash, the fifth-best time among cornerbacks at the NFL Combine.