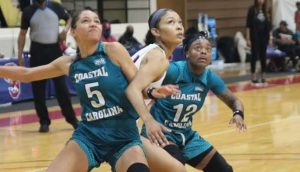 The loss dropped Coach Audra Smith‘s team to 0-2, while the visitors improved to 2-0 on the season. Blayre Shultz and Deja Richardson were also in double figures for Coastal, which broke out to a 42-24 lead at the half.

The visitors outscored SC State 20-16 in the third period to take a 62-40 lead into the final period in which SC State played the Chanticleers even, 19-19, but by then, the outcome was not in doubt.

Coach Smith’s team will try for its first win of the campaign Tuesday, November 16th, when the Lady Bulldogs host USC Upstate in a 7 p.m. contest at Smith-Hammond-Middleton Memorial Center.