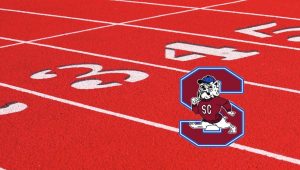 ORANGEBURG, SC (June 2, 2022)– The South Carolina State men’s 4×100 meter relay team was unable to advance to the 2022 NCAA Outdoor Track & Field Championship Friday as the Bulldog foursome finished 18th in the 24-team field at Bloomington, IN.  Only 12 teams advanced to the NCAA Championship set for Jun.  8-11 in Eugene, OR.

The SC State foursome of Waddell Rembert-Jett, Brenton Shippy, Erick Hill and Jaden Barker struggled to a 40.43 clocking, finishing eighth in Heat 2. The time, the slowest of the 2022 campaign for SC State, was well off the school-record clocking of 39.54 the team ran earlier in the season.

The Bulldogs were without one of their top sprinters in Devin Brewington, who had teamed with Rembert-Jett, Shippy and Hill to set the record. Barker filled in for Brewington.