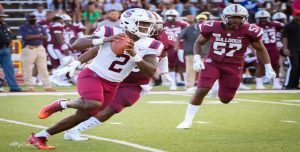 The Aggies jumped to an early 29-6 advantage late in the second quarter. Fields, Jr. 37-yard pass connection to Richard Bailey cut the lead 29-13 with 2:00 minutes left in the half.

New Mexico State led as many as 43-13 early in the third quarter, before South Carolina State’s late rally surge produced 22 unanswered points. Fields, Jr. connected three straight scoring drives with touchdown passes to Hezekiah Massey of 6-yards, Will Vereen of 18-yards and 20-yard toss to Kendrell Flowers to pull within a score, 43-35.

An interception by Nick Giacolone with 1:09 remaining in regulation sealed the victory for the Aggies.

The Bulldog defense was spearheaded by senior linebacker Chad Gilchrist with eight (8) tackles, while Jaylen Evans, BJ Davis and Octaveon Minter all added six (6) each in the loss.

Despite the loss, South Carolina State offense led the way with 428 total yards on offense along with 24 first downs. Freshman kicker Dyson Roberts had a solid day punting with four kicks for 184-yards (46.0 yards per punt) with a long of 58-yards, one inside the 20 and two touchbacks.