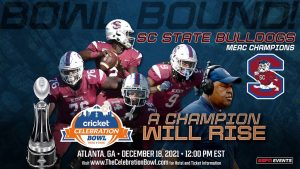 NORFOLK, Va., (December 17, 2021)  –When the dust has settled following the Cricket Celebration Bowl on Saturday, Dec. 18 at Mercedes-Benz Stadium in Atlanta, a new champion will have been crowned.

The Bulldogs enter the contest with a 6-5 record after finishing with an unblemished 5-0 mark in the MEAC. The Tigers are 11-1 overall, 8-0 in the SWAC. This will be the fifth meeting between the two storied programs, with the series knotted at 2-2.

Oliver “Buddy” Pough, the legendary head coach of the South Carolina State Bulldogs, said last week, “It’s been a long year. We’ve been going through all kinds of pandemics. This is our 16th ballgame in this calendar year, but we’ve been able to get through it all and get to the point where we are. We were able to get into our conference race and we were able to win our league.

“It was really an exciting year for us. Our entire South Carolina State fan base is as energized and excited as I’ve ever seen it. We look forward to seeing if we can pack this place. I’m excited that we can be a part of a game that has that kind of excitement.”

Much will be on the line when South Carolina State squares off against Jackson State on Saturday. The Bulldogs will face the pressure of carrying on the MEAC’s legacy of success in the Cricket Celebration Bowl, hoping to improve upon the MEAC’s 4-1 record over the SWAC in the event. MEAC champions have upended their SWAC counterparts in each of the last three meetings, including the last time the contest was held when North Carolina A&T State defeated Alcorn State 64-44 in 2019. The MEAC’s only loss in the event occurred in 2016, when North Carolina Central was on the short end of a 10-9 defensive battle against Grambling State.

Saying the matchup between South Carolina State and Jackson State is a matchup between two of the most storied programs in HBCU football would be an understatement. The two programs are actually two of the most storied programs in all of FCS football, period. The two programs have combined for 34 conference championships and 952 wins, and both have produced four Pro Football Hall of Famers each (SCSU being represented by Harry Carson, Deacon Jones, Marion Motley and Donnie Shell. JSU’s alumni in the Hall are Lem Barney, Robert Brazile, Walter Payton and Jackie Slater).

Pough said he wasn’t always a fan of the postseason bowl game, but that he surely has become one of the game’s biggest supporters over the years.

“It’s been a long time coming,” Pough joked. “I’ve been trying to get to this thing for about 10 years. I fought for a good many years to keep this thing from happening. By the time I figured this is something we ought to buy into, then I think I’ve been punished by not being on board from the very beginning and not being able to come (to the bowl) for all those years.”

Pough said now that his Bulldogs have earned a berth to the Cricket Celebration Bowl, they have their work cut out for them by having to go head-to-head against a Jackson State program that has been the talk of college football for much of the season.

“Jackson State has done a marvelous job of getting everyone excited about HBCU football this season,” Pough said. “We get a little luster off this thing too. This whole thing comes together in a way that can really be special for years to come.

“This game will give us a chance to be seen around the country in a way that we ordinarily wouldn’t have a chance to. This game will help us to build our enrollment and just have positive vibes about ourselves.”