SC STATE ENSHRINES EIGHT INDIVIDUALS AND ONE TEAM IN HOF

ORANGEBURG, SC (October 7, 2021) – South Carolina State inducted eight individuals and one team into its Athletic Hall of Fame on Oct. 1, 2021 during a special enshrinement ceremony at Smith-Hammond-Middleton Memorial Center. The ceremony was originally set for September of 2020 but was postponed due to the COVID-19 pandemic. 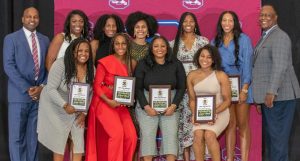