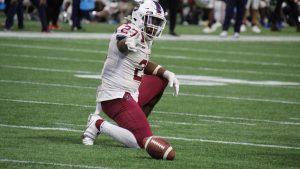 SC State will open the season on the road with four straight non-conference games, beginning in the sunshine state with AAC foe Central Florida in Orlando, Fla. at the “Bounce House”, on Thursday Sept.1st, followed by a trip back against former league rival Bethune-Cookman on Sept.10th in Daytona, Fla.

The Bulldogs will have a bye week on Sept 17th,  before their next stop at North Carolina A&T State on Sept.24th inside Aggie Stadium in Greensboro, NC, then a return home to Palmetto State features a showdown with SEC opponent South Carolina on Oct. 1st in Columbia, SC at Williams Brice Stadium.

Pough and the Bulldogs return home for their home-opener and three straight games in Oliver C. Dawson Stadium hosting the Rattlers of Florida A&M on Oct.8th, Virginia-Lynchburg on Oct. 15th (HOMECOMING 2022),before opening up Mid-Eastern Athletic Conference (MEAC) play versus North Carolina Central on Oct. 22nd, in Orangeburg, SC.

The back-to-back MEAC Champions & 2021 National Black Champions, hit the road once again for a journey to Baltimore, MD to take on Morgan State on Oct. 29th, before returning home to host Delaware State on Nov.5th.

A trip to the nation’s capital to take on Howard is set for Nov.12 in Washington, DC, before the regular season ends at home for a season-finale with Norfolk State on Nov. 19th.