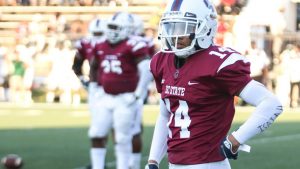 South Carolina State standout defensive back Decobie Durant has been invited to participate in the East-West Shrine Bowl, giving the Mid-Eastern Athletic Conference (MEAC) at least one participant in the contest.

Durant, the MEAC Preseason Defensive Player of the Year and a STATS Perform FCS Preseason All-American, leads the MEAC in passes defended with 11, and his three interceptions so far in 2021 are tied for the second-most in the conference.

Two of those interceptions came against Clemson. Durant is third in FCS in passes defended and tied for 10th in total interceptions.

As of this release, Howard defensive back Aaron Walker has been invited to the HBCU Legacy Bowl (Feb. 19, 2022 in New Orleans, La.), as has North Carolina Central wide receiver Ryan McDaniel.