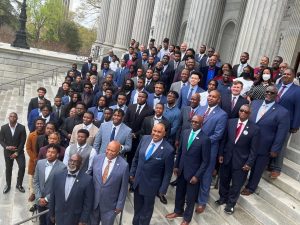 The kicker/punter from Sumter was a prime example of the “Bulldog tenacity” on display as the SC State football team was honored by both houses of the state Legislature and Gov. Henry McMaster for winning the HBCU National Championship.

“It means everything, not only for HBCU culture but for us as a team,” Roberts said of Wednesday’s recognition. “Not everybody gets recognized as smalltown heroes, so it’s special to be recognized at the Capital.”

After finishing atop the Mid-Eastern Athletic Conference on the season, the Bulldogs won the National HBCU Championship by upsetting the favored Jackson State University Tigers 31-10 at the Celebration Bowl on Dec. 18 in Atlanta.

“I feel like that’s what the Orangeburg community needed for a long time,” Roberts said. “You’ve got everything else, so why not bring a championship home?”

During a luncheon at the Simon Blatt Building in Columbia, the Orangeburg County delegation in the House of Representatives honored both the university and the team with proclamations from the House and the governor declaring Wednesday as “South Carolina State University Day” in South Carolina. The luncheon was followed by the team’s appearance at the Senate, where a third proclamation was affirmed.

“We just want to first and foremost acknowledge South Carolina State University – the job it is doing in our community to educate our young folks,” state Rep. Russell Ott (D-Orangeburg) said before turning his attention to football team members. “I know how hard it is foremost to be a student, but then when you add on being a student-athlete and all that entails – the time management you have to put into it – I get it and a lot of folks get it.

“You represent the university well. I can’t tell you how proud we are of you,” he said.

State Rep. Jerry Govan, a 1982 SC State alumnus, spoke of meaning behind the “Bulldog tenacity” slogan often used when describing the spirit at his alma mater.

“We’re going to take it all the way to the mat no matter the circumstances or the situation,” Govan said. “It’s a proud tradition … it’s what we live for as Bulldogs.”

After some good-natured ribbing about HBCU rivalries, State Rep. Gilda Cobb-Hunter (D-Orangeburg) – a graduate of Florida A&M University – offered the Bulldogs a challenge for after graduation.

“We need alumni to step up to the plate, to do your part, to support your institution,” Cobb-Hunter said. “It does not matter which HBCU you went to. What matters is what you are doing with the opportunity that HBCU provided you, and make sure you give back to that institution.”

She also told team members they are role models, so they should act like it.

“Don’t underestimate the role you play in attracting students to come to South Carolina State University,” Cobb-Hunter said. “When people see you and see the good stuff you are doing – that you’re trying to do – guess what? They want to be just like you.”

In accepting the proclamations, Bulldogs Head Coach Oliver “Buddy” Pough recalled the rough start the team had to overcome, beginning the season at 1-4.

“For us to be from there to where we are today, I appreciate you guys (his players) more than anything else,” Pough said, “and I appreciate you all for having us here – the delegation from Orangeburg County and all the others who are here today to congratulate us.”

SC State Interim President Alexander Conyers described the faith the campus community had in the team.

“We’ve recognized this from day one. We’ve thanked them,” Conyers said, “but it certainly … does our hearts good to see that the entire state sees what we see in Orangeburg and what we see in our Bulldog football team,” he said. “That is Bulldog tenacity and Bulldog dominance.”