Panthers Take an 81-59 Loss at Millersville 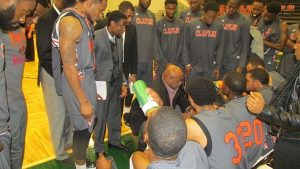 MILLERSVILLE, PA (November 15, 2021) – The Claflin Panthers (0-2) gave a strong effort, but the team could not quite keep up with the Millersville Marauders (2-0), Sunday afternoon. While the Panthers were able to keep the high-powered Marauder offense in check, the team struggled to get their own points on the scoreboard in the tough loss.

As a team, the Panthers played some solid defense, but the effort proved costly on the offensive end. The Panthers forced the Marauders to take high quality shots as they limited them to just 46 shot attempts, but the home team made the most of their opportunities, connecting on 22 of them and shooting 47.8% from the floor. Conversely, the Panthers had a tough time making shots, shooting 37.9% (22-of-58) from the floor. Graduate guard Noah Jenkins led the way for the Panthers with a career-high 20 points and six rebounds in the game. Junior guard Alan Hatchett added 13 points. The duo were the only Panthers to reach double-digit scoring in the game.

The first half was especially tough for the Panthers. The team totaled 27 points in the period while allowing 40 points to the Marauders. After a slow start, the Panthers were able to pull to within two points of the Marauders after a layup from freshman forward Marquez Ray pulled cut the Claflin deficit down to two points, 6-4 with 16:07 left in the period. However, things got tougher from there. The Panthers fell behind by as many as 16 points, 20-36 with 2:34 left in the first half before a strong finish to the half left the team trailing, 40-27.

In the second half, the Panthers continued to have a hard time stopping the Marauders’ attack, but the team was able to put together some strong defensive runs during the period. Midway through the period, the Panthers trailed the Marauders by as many as 30 points, 40-70 with 9:00 left to play. The team would get things into gear, however, and cut their deficit down to 20 points after a lay-up from sophomore guard Dexter Jones with 3:26 left to play. In the end, the Panthers finished the day with the 81-59 loss.

With the loss, the Panthers fall to 0-2 on the season. The team will return to action, Saturday, November 20, 2021 when they host the Voorhees College Tigers for Homecoming.