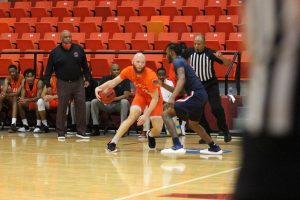 ORANGEBURG, SC (January 11, 2022) – The Claflin Panthers (3-11, 2-3 CIAA) gave a tremendous effort, but the team could not quite get the late push that they needed in a 77-70 loss to the Lincoln (Pa.) Lions (10-4, 3-0 CIAA), Monday evening. The Panthers kept the game competitive for all 40 minutes of play, but a big second half by the Lions proved to be too much for the Panthers to overcome.

The Panthers’ loss came despite a terrific overall performance. As a team, the team had a great outing, shooting 51.9% (28-of-54) from the floor.  It was the Panthers’ upper classmen who led the way for the team. Graduate guard Romero Hill and senior guard Donnell Frayer, Jr. both scored 15 points to lead the Panthers. Fellow graduate Noah Jenkins added 12 points as well. Hill also added a team-high five rebounds in the game.

The game was a hard-fought affair from the very beginning as the Panthers and Lions played a competitive first half. Though the Panthers would take an early led, the team would not go ahead by more than three points, 7-4 after a lay-up from senior Isaiah Jennings with 13:27 left in the half. The Panthers were able to take a 26-25 lead after a Frayer, Jr. three-pointer with 3:05 left in the half, but the team would allow a 9-5 run by the Lions in the final three minutes to close the half trailing, 34-31, after a Hill lay-up at the buzzer.

The second half turned out to be a back-and-forth battle between the Panthers and Lions. The Panthers struck first as a Hill three-pointer with about 13:00 left to play pushed the Panthers to a 49-46 lead. However, Lincoln (Pa.) answered in a big way, going on a 17-2 run that left the Panthers trailing, 64-51 with 5:52 left to play. In the final minutes of the game, the Panthers did a terrific effort to come back into the game when a Jenkins lay-up capped a 10-point Panthers run that cut their deficit down to just six points, 68-62 with 2:12 left to play. Unfortunately, the Panthers would not be able to pull out the win and finished the evening with the 77-71 loss.

The Panthers will return to action, Wednesday, when the team hosts the Virginia Union Panthers in a 7:30 p.m. game.