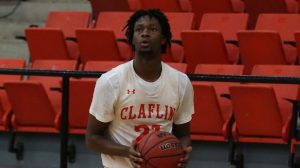 ORANGEBURG, SC (January 12, 2022) – The Claflin Panthers (3-12, 2-4 CIAA) could not find any answers when the team took a hard-fought 74-56 loss to the Virginia Union Panthers (10-3, 3-0 CIAA), Wednesday evening. Though Claflin gave a tremendous effort for all 40 minutes of the game, the Panthers could not quite get their offense in gear against the tough Virginia Union defense.

As a team, the Panthers had their fair share of offensive struggles in the loss. The Panthers finished the game shooting 34.6% (18-of-52) from the floor while shooting 26.3% (five-of-19) from the three-point line. Claflin junior forward Shyim Cunningham led the way for the team with 11 points in the game while fellow junior Shamarie McLeod added 10 points.

Though the Panthers struggled early in the first half, the team showed their true grit with some quality play later in the half. Things got tough early for the Panthers as the team didn’t manage a field goal for nearly four minutes to start the game. The effort left the Panthers trailing Virginia Union, 8-2 before a McLeod broke the seal with a three-pointer that cut the Claflin deficit down to three points, 8-5. The Panthers would go on to take their first lead of the game, 10-8 after McLeod’s second three-pointer of the half with 14:30 left in the half. Things got a lot tougher for the Panthers as the team allowed Virginia Union to build its largest lead of the half, 22-12. From there, the Panthers would manage to keep the game within reach before taking a 34-25 deficit into the locker room at halftime.

The second half turned out to be a bit different. The Panthers came out strong as they came out with a great effort and pulled to within three points, 34-31, after a Shyim Cunningham three-pointer at the 17:42 mark. Unfortunately, the Panthers would not get any closer as they allowed Virginia Union to pull away with the win. After allowing VUU to go ahead by as many as 20 points, 60-40, with 6:35 left to play before steadily working their deficit down to the final 74-56 score.

With the loss, the Panthers fall to 3-12 overall and 2-4 in Central Intercollegiate Athletic Association (CIAA) play. The Panthers will return to action, Saturday, when the team hosts the Livingstone College Blue Bears in a 3:30 p.m. game.