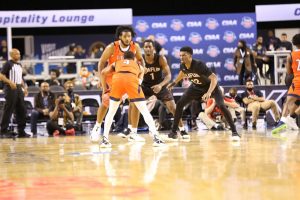 BALTIMORE, MD (February 22, 2022)  – The Claflin University Panthers (7-20) gave it their all, but the team could not avoid a 71-58 loss to the Virginia State Trojans (9-15), Tuesday afternoon. After a great first half effort, the Panthers were not able to stop the Trojans who broke out for a big second half effort to end the Panthers’ season in the opening round of the 2022 Central Intercollegiate Athletic Association (CIAA) Men’s Basketball Championship Tournament.

The Panthers took the loss despite a great overall effort in the game. The team played a solid offensive game, shooting 40.4% (23-of-57) from the floor, but the team could not stop a scorching hot Virginia State team. Claflin graduate guard Donnell Frayer, Jr. led the way for the Panthers with 11 points in the game. Freshman forward HowVante Hutcherson led the Panthers’ rebounding efforts with seven rebounds in the game.

The second half turned out to be a different story as the Panthers allowed the Trojans to continue their run from the late first half. The Panthers soon found themselves in a tied game, 42-42, with 14:10 left in the game before allowing the Trojans to take a 52-42 lead. The Panthers would get back-to-back three-pointers from Frayer, Jr. and junior forward Shamarie McLoed with 10:55 left in the game. The effort would cut the Panthers’ deficit down to just four points, 48-52. The Panthers kept their strong play going until the final minutes of the game as a lay-up from graduate guard Romero Hill pulled the Panthers to within three points, 57-54, with 6:21 left to play. Unfortunately, the Panthers would get no closer as the team allowed another late run by the Panthers. In the final six minutes of the game, the Panthers managed just one field goal to end the day with the 71-58 loss.

With the loss, the Panthers finish the 2021-22 season with a 7-20 record. For more information on Panthers basketball, contact the Claflin University Office of Athletic Media Relations at (803) 535-5548 or log on to www.athletics.claflin.edu.