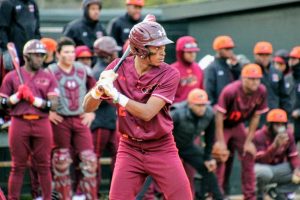 COLUMBUS, GA (March 5, 2022) – The Claflin Panthers (1-4, 0-2 PBC) returned to Peach Belt Conference (PBC) action, Saturday afternoon where the team took a 12-2 loss to the Columbus State Cougars (16-3, 2-0 CIAA). The Panthers played a much-improved game after opening the series with a tough loss, but the team still came up a bit short in game one of Saturday’s doubleheader.

As a team, the Panthers played better at the plate and on the field in the game. The team totaled five hits in the game while allowing just nine hits to the Cougars. Claflin graduate outfielder Steven Joyner continued his terrific weekend when he went one for three at the plate with two RBI and a home run for the second game in a row. Junior short stop Da’Avion Sumpter added a one-for-four effort with a double and a run scored.

The Panthers didn’t have long to wait for their next action as the team would return to action later in the day to close out the doubleheader. For more information on Panther baseball, contact the Clalfin University Office of Athletic Media Relations at (803) 535-5548 or log on to www.athletics.claflin.edu.