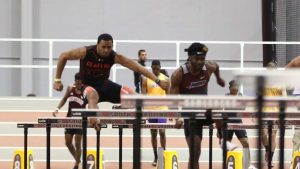 CENTRAL, SC (April 3, 2022) – The Claflin University men’s track & field team showed had some great performances at the Gotta Run Invite hosted by Southern Wesleyan University. The Panthers continued to perform well both on the track and in field events at the meet.

The Panthers had some great efforts on the track, especially in the hurdles events. Freshman Darius Holmes led the way with a great effort in the men’s 110m hurdles. He placed sixth in the event with a 16.02. The time is one of the top times in the Central Intercollegiate Athletic Association (CIAA). Senior LeCarlos Watlington added a sixth place finish of his own in the men’s 400m hurdles. He ran a 1:00.24 in the event. The Panthers’ 4x400m relay team also had a great performance when they placed third in the event with a 3:22.46.

In field events, sophomore Jermaine Harris had a strong effort when the placed ninth in the men’s long jump. He recorded a 20’5.25″ (6.23m) leap.

The Panthers will return to action on April 16th when the team heads to Columbia, South Carolina to take part in the Gamecock Invitational. For more information on Panthers track & field, contact the Claflin University Office of Athletic Media Relations at (803) 535-5548 or log on to www.athletics.claflin.edu.