Panthers Run Away for an 80-59 Win Over Voorhees 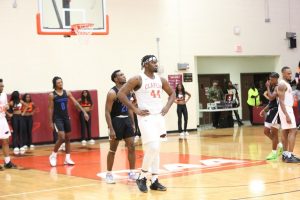 ORANGEBURG, SC (November 20, 2021) – The Claflin Panthers (1-2) controlled the game from the very beginning when the team took an impressive 80-59 win over the Voorhees Tigers (3-10), Saturday afternoon. The team took the win by combining a hot shooting effort with some tough defense to claim the win.

The Panthers took advantage of home court with a stellar shooting performance from the floor. As a team, the Panthers shot a scorching hot 53.0% (35-of-66) from the floor. Three Claflin players reached double-digit scoring in the win with junior guard Alan Hatchett, graduate Donnell Frayer, Jr., and senior Isaiah Jennings all scoring 16 points each to lead the way for the team. Hatchett completed the double-double effort with 10 rebounds as well. Graduate guard Romero Hill added 11 points with six assists as well.

The second half saw more of the same as the Panthers outscored their opponents, 44-35 to claim the win. The Panthers went ahead by as many as 28 points, 78-50 after a jumper from graduate guard Noah Jenkins with 4:14 left to play. Though the Tigers would attempt to get back into the game, the Panthers would not allow their win to slip away. The team allowed the Tigers to pull to within 21 points, but they would allow them to get any closer as they pulled away for the 80-59 victory.

With the win, the Panthers improve to 1-2 on the season.