Panthers Rally Late for a 9-5 Win Over Benedict 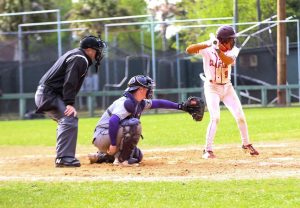 ORANGEBURG, SC (April 19, 2022) – Bragging rights will come to Orangeburg, S.C. as the Claflin Panthers (4-23) rallied late to take a 9-5 win over the rival Benedict Tigers (5-34), Tuesday afternoon. The Panthers stormed back late with nine runs coming in the final four innings of the game to claim the victory.

The Panthers claimed the win behind a great offensive effort at the plate. The team totaled 13 hits in the game, including three doubles. Claflin sophomore left fielder Kobe Miller led the way with a two-for-four batting effort with a run scored and two RBI in the game. Junior outfielder Rufus Hurdle, Jr. added a two-for-four batting effort as well. Freshman Joshua Cooper went two for three with two turns scored and two RBI as well.

In the early going, the Panthers had a tough time getting going. Benedict scored a second inning run on a wild pitch, but the Panthers responded with an RBI single from junior second base Da’Avion Sumpter scored Miller. After allowed runs in the fourth and fifth innings, the Panthers chipped away at their deficit with a Miller RBI double to score Cooper. The sixth inning was when things really got going for the Panthers when the team scored three runs, followed by four seventh inning runs. The effort left the Panthers on top, 9-4. The team allowed one more eighth inning run before closing out the win with some defense.

Claflin redshirt-junior MacKenzie Gay (2-0) took the pitching win as he started the game and he went 7.2 innings and recorded four strikeouts. Junior Elliot Figueora came in for an inning before Jaden Hardin closed out the win in the ninth inning.

With the win, the Panthers improve to 4-23. The team will return to action, Friday when they return to Peach Belt Conference action against Flagler. For more information on Panthers baseball, contact the Claflin University Office of Athletic Media Relations at (803) 535-5548 or log on to www.athletics.claflin.edu.