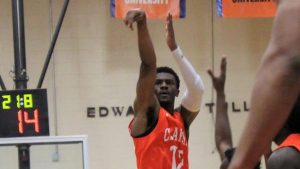 ORANGEBURG, SC (January 9, 2022) – The Claflin Panthers (3-10, 2-2 CIAA) made some clutch plays to claim a 78-74 Central Intercollegiate Athletic Association (CIAA) win over the Bowie State Bulldogs (3-10, 1-1 CIAA), Saturday afternoon. In a game that turned out to be a battle of wills, it was the Panthers who made the big plays when it counted in the victory.

As the score indicated, the game was evenly matched and hard fought, and in the end, it was the Panthers that came out on top. Senior forward Isaiah Jennings led the way for the Panthers with a game-high 19 points while freshman center Marquez Ray nearly pulled off a double-double with 15 points and seven rebounds. Graduate guard Donnell Frayer, Jr. added 16 points. Junior forward Shamarie McLeod added 13 points with six rebounds.

Though the Panthers finished the game strong, things looked very different in the early portion of the game. The Panthers came out with a slow start as the team fell into an early 25-10 deficit at the 8:51 mark. However, it was then that the team began its comeback effort. The Panthers’ most impressive run of the first half came in the final four minutes when the Panthers didn’t allow another Bulldog field goal for the final four minutes and mounted a 16-3 run that was capped by a three-pointer from McLoed that gave the Panthers a 36-34 lead heading into the locker room.

After opening the second half with a lead, the Panthers had to fend off a strong Bulldog attack before hitting some clutch shots late to claim the win. Bowie State wasted little time in reclaiming the lead and left the Panthers trailing, 47-42 with just over 15 minutes left in the game. The Panthers would answer in a big way as a McLeod jumper with just over 10 minutes left to play gave the Panthers a 58-54 lead. For the remainder of the game, the Panthers would not let go of their lead although the team did allow the Bulldogs to tie the game multiple times. It was in the final minutes when the Panthers really showed their grit. The Panthers entered the final minute of the game tied, 70-70. From there, the Panthers hit six of eight free throws while only allowing a pair of free throws and a field goal to the Bulldogs and sealed the win.

With the victory, the Panthers improve to 3-10 overall and 2-2 in CIAA play. The Panthers will return to action, Monday when the team hosts the Lincoln (Pa.) Lions in a 7:30 p.m. game.