Panthers Have a Strong Showing at 2022 Weems Baskin 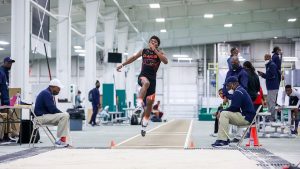 COLUMBIA, SC (March 28, 2022) – The Claflin University men’s and women’s outdoor track & field teams put on some terrific performances at the 2022 Weems Baskin. Though competing in just their second outdoor meet of the season, the Lady Panthers and Panthers both looked terrific early in the season.

The Lady Panthers set the tone with some great performances on the track. Freshman sprinter Zoe Adams continued to be one of the top sprinters in the region when she ran a 56.22 in the women’s 400m dash. The effort places her atop the NCAA Division II Atlantic Region. She placed seventh in the invite heat.

In field events, the Lady Panthers also had a great day with senior thrower Zaria Nelson leading the way. She set a school record when she recorded a 42′ 2″ (12.85m) throw in the women’s shot put. The effort earned her a seventh-place finish in the event and places her at the top of the Central Intercollegiate Athletic Association (CIAA).

The Panthers had a terrific effort as well. On the track, it was sophomore Chandar Anderson who led the way for the team. He placed second in the men’s 400m dash with a 49.42 in the event.  Freshman Darius Holmes also had a great performance when he placed 15th in the men’s 110m hurdles with a 15.27. In field events, it was the freshman Jocolbi Morgan who placed fourth in the men’s long jump. He recorded a 23’8.75″ (7.23m) leap. The distance was the best in the CIAA.

The two teams will return to action, Saturday, April 2nd when the team heads to Central, South Carolina to take part in the Gotta Run Invite. For more information on Claflin track & field, contact the Claflin University Office of Athletic Media Relations at (803) 535-5548  or log on to www.athletics.claflin.edu.