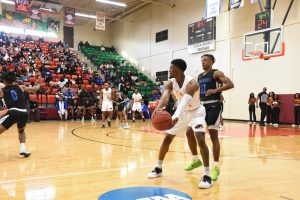 ETTRICK, VA (December 20, 2021) – The Claflin Panthers (2-10, 1-2 CIAA) played a great first half, but it was not enough as the team took an 84-70 road loss to the Virginia State Trojans (4-6, 1-2 CIAA), Monday afternoon. After keeping the game close with a hard-fought first half, the Panthers were outgunned in the second half to take the tough loss.

The Panthers took the loss despite one of their best offensive showings of the season. As a team, the Panthers shot a scorching hot 48.3% (29-of-60) from the floor, including going six-for-12 from the three-point line. Graduate guard Donnell Frayer, Jr. had a terrific night for the Panthers as he scored a season-high 27 points in the game. Fellow graduate guard Noah Jenkins added 16 points while graduate guard Romero Hill added 12 points with seven assists.

In the first half, things looked great for the Panthers. During the half the team kept the Trojans within reach for all 20 minutes and were just shy of taking a lead at the half. The Panthers were able to grab their first lead of the game after a Hill jumper with 13:37 left in the half left the team on top, 16-15. The jumper came in the midst of a 10-point Claflin run that left the Panthers with their largest lead of the game, 20-15 with 11:19 left in the first half. Though the Panthers were not able to hold on to their lead, the team was able to stay within a point, 39-38 at halftime.

With the loss, the Panthers fall to 2-8 overall on the season and to 1-2 in Central Intercollegiate Athletic Association (CIAA) play. The team will return to action in 2022 when the team hosts the Bowie State Bulldogs at Tullis Arena on January 8th.