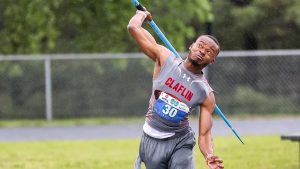 BOWIE, MD (May 7, 2022)  – The Claflin University men’s and women’s track & field teams completed a solid weekend at the 2022 Central Intercollegiate Athletic Association (CIAA) Outdoor Track & Field Championship Meet. The Lady Panthers finished the meet in fourth place with 59 total points while the Panthers finished the meet in sixth place with a total of 44 points at the meet.

Though direct conference competition is over for the Lady Panthers and Panthers, the teams will look to send some of their student-athletes to the 2022 NCAA Division II National Championship Meet. For more information on Lady Panthers and/or Panthers track & field, contact the Claflin University Office of Athletic Media Relations at (803) 535-5548 or log on to www.athletics.claflin.edu