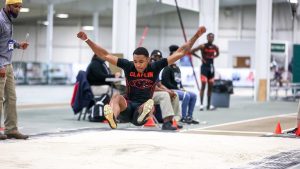 WINSTON-SALEM, NC (February 14, 2022) – The Claflin University men’s and women’s track & field teams had some great individual performances to close out the 2022 Central Intercollegiate Athletic Association (CIAA) Indoor Track & Field Championships, Monday. With the conference titles on the lines, both teams stepped up for some terrific performances.

“Overall, I’m pleased with the women’s program,” said Claflin track & field head coach Garon Jackson. “When I got here, we were at the bottom of the conference with 13 points. Now we’re a top five team with 47 points and we’re showing our growth as  a program.”

The Lady Panthers finished the meet with 47 total team points to tie for fifth place at the meet. Freshman Zoe Adams had the best individual performance for the Lady Panthers. She opened the day on a high note, winning the women’s 400m dash finals with a 56.38, even surpassing her NCAA Division II Atlantic Region leading time. With the effort, she claimed the title of conference champion in the event. She added another great performance when she placed second in the women’s 200m dash. She ran a 25.41 to finish as runner up in the event. Fellow freshman Madison McDonald also had a great performance when she placed third in the women’s 3000m run. She ran a 12:10.07 in the event. Not to be outdone, Lady Panthers senior Zaria Nelson won the women’s shot put with a 12.76m throw. She won the event after holding the top distance in the conference for the bulk of the season.

Another highlight of the meet was the performance of the Lady Panthers 4x400m relay team. The team placed fourth in the event with a 4:08.91. The finish shows a steady improvement for the program. “Our women finished fourth almost earning a medal which is great because last time we only finished sixth.”

With the effort, the Lady Panthers will now turn their focus to the outdoor track & field season. “I’m thinking we can improve the program going into outdoors,” Jackson added. “We just need to stay focused and committed to what were doing.”

As a team, the Panthers men’s track & field team placed eighth at the meet. The team finished the meet with 37 points to place eighth. Though the Panthers had sone struggles as a team, there were several promising individual performances at the meet. “My mission is to create an all-around program and to develop in some areas that we didn’t have before,” Jackson said. “And we knew that we would take some steps backwards before we move forward.”

“As a team we need to score points where we didn’t and we need to focus on getting better heading into the outdoor track & field season,” Jackson said.