Panthers Close Series With a 10-2 Loss at Columbus State 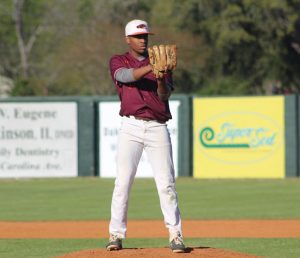 COLUMBUS, GA (March 5, 2022) – The Claflin Panthers (1-5, 0-3 PBC) look a bit better every game and the team showed some steady progress in a 10-2 loss to the Columbus State Cougars (17-3, 0-3 PBC), Saturday afternoon. The loss closed out a three-game series that saw the Panthers get better in each outing.

In game two of the doubleheader, the Panthers had their best performance at the plate of the entire series. The team totaled six hits in the game. Freshman outfielder Kobe Miller led the way for the Panthers with a two-for-four batting effort with a run scored. He was the only Panther to record multiple hits in the game.

The Panthers’ scoring all came in the fifth inning when Miller hit an RBI single that was followed by another RBI single from sophomore outfielder Eric Sledge.

With the loss, the Panthers fall to 1-5 overall and 0-3 in Peach Belt Conference (PBC) play. The team will return to the road for their next action as the team will head to Americus, Georgia to take on Georgia Southwestern State University. For more information on Panthers baseball, contact the Claflin University Office of Athletic Media Relations at (803) 535-5548 or log on to www.athletics.claflin.edu.