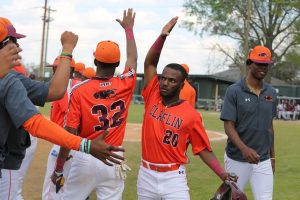 ORANGEURG, SC (March 29, 2022) – The Claflin Panthers (2-14) pulled out all the stops when the team claimed a dramatic 19-18 win over the Morehouse Tigers (4-17), Wednesday evening. Claflin freshman Joshua Cooper hit a walk-off RBI single that scored the winning run in the bottom of the ninth inning to claim the win.

Offense was the name of the game for both of the teams as they combined for 37 runs and 33 hits in the game. The Panthers turned in a season-high 16 hits in the game. Junior outfielder Rufu Hurdle, Jr. and junior second baseman Da’Avion Sumpter both went three-for-four at the plate. Sumpter finished the day with five RBI with a home run.

The Panthers’ win came in a dramatic fashion as the team stormed back from a mid-game deficit to claim the victory. In the fifth inning, the Panthers fell into a 13-8 deficit. The team came back with a pair of runs in the fifth inning and four sixth inning runs that was sparked by Sumpter’s two run homer. The effort left the Panthers with a 14-13 lead. However, the lead wouldn’t last as the Panthers allowed three more runs by the Tigers in the eighth inning to fall behind 16-13. The Panthers scored four eighth inning runs to go ahead 18-16. However, the Panthers allowed a pair of ninth inning runs by the Tigers and the team headed into the ninth inning with an 18-18 tie. After sophomore Eric Sledge opened the inning with a lead off walk and he followed the effort by stealing second before freshman short stop Joshua Cooper hit the walk off RBI single that scored Sledge.

The Panthers had an army of pitchers to take the mound in the game. Junior Jaiden Hardin started the game and had the longest stint on the mound with 2.2 innings. He finished with a strikeout. Talmon Hubbard closed the game and got the win with an inning and he recorded two strikeouts.

With the win, the Panthers improve to 2-14 overall. The team will return to the road for their next Peach Belt Conference action when the team heads to Aiken, S.C. to take on the USC-Aiken Pacers in a weekend series beginning, Friday. For more information on Panthers baseball, contact the Claflin University Office of Athletic Media Relations at (803) 535-5548 or log on to www.athletics.claflin.edu.