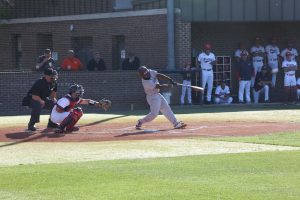 DAHLONEGA, GA (April 29, 2022) – The Claflin Panthers (5-26, 1-24 PBC) got their first Peach Belt Conference (PBC) win of the season when the team took a 6-3 road win over the North Georgia Nighthawks (28-18, 14-11 PBC). The Panthers used a big offensive effort and a clean defensive effort to secure their first conference win in over a year.

Offensively, the Panthers had a great day at plate. The team totaled 11 hits in the game and scored six runs. Claflin junior catcher DeShawnte Carraway led the way for the team with a two-for-four batting performance with a pair of doubles with a run scored and an RBI. Junior outfielder Rufus Hurdle, Jr. added a two-for-four batting effort as well with a run scored. Senior outfielder Steve Joyner also recorded a solo home run as well.

Claflin junior Kyle Hawkins (2-9) took the pitching victory with a terrific performance. He started the game and threw all nine innings of the game. He finished with only three runs allowed (three earned) and he finished the game with three strikeouts.

With the win, the Panthers improve to 5-26 overall and they pick up their first Peach Belt Conference win since April 2, 2021. The Panthers will return to action, tomorrow when they close out the 2022 season with a doubleheader against the Nighthawks. For more information on Claflin baseball, contact the Claflin University Office of Athletic Media Relations at (803) 535-5548 or log on to www.athletics.claflin.edu.