Panthers Break Out for a 14-8 Win Over Clark Atlanta 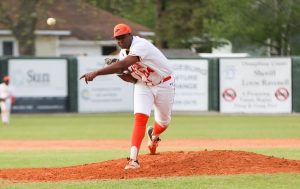 The Panthers got their scoring going early when the team scored 10 runs in the first two innings of the game. After putting a pair of first inning runs on the scoreboard, the Panthers broke out for eight second inning runs. In the fourth inning, the team added four runs to cap their scoring effort. The Panthers had to soon fend off a hard-charging Clark-Atlanta team that scored all eight runs in the final four innings of the game.

Claflin redshirt-junior MacKenzie Gay (1-0) got the pitching win. He started the game and he went six innings. He finished the game with one run allowed and six strikeouts.

With the win, the Panthers improve to 3-20. The team will return to Peach Belt Conference (PBC) action when the team heads to Milledgeville, Georgia to take on Georgia College in a weekend series. For more information on Claflin baseball, contact the Claflin University Office of Athletic Media Relations at (803) 535-5548 or log on to www.athletics.claflin.edu.