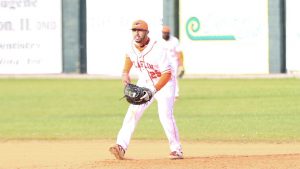 AUGUSTA, GA (July 5, 2022) – The academic success of the Claflin University student-athletes continues to show as 18 members of the 2022 Claflin baseball team were named to the 2021-22 Peach Belt Conference Presidential Honor Roll, presented by Barnes & Noble College. The Honor Roll recognizes outstanding academic achievements of PBC student-athletes who compete in the league’s championship sports either as full member institutions or as associate members. As an associate member of the Peach Belt Conference in baseball, the Panthers had 18 student-athletes who earned spots on the team.

The honor marks the second for Claflin sophomore Kobe Miller, who was also an all-conference selection earlier this spring.

For more information on Panthers athletics, contact the Claflin University Office of Athletic Media Relations at (803) 535-5548 or log on to www.athletics.claflin.edu.