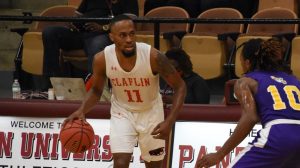 It was offensive struggles that plagued Panthers throughout the game. As a team, the Panthers shot 29.6% (16-for-54) in the game. Junior guard Allen Hatchett led the way for the Panthers with 11 points in the game. Graduate forward Romero Hill added nine points. Senior forward Isaiah Jennings led the Panthers rebounding efforts with five rebounds in the game.

With the loss, the Panthers fall to 2-8 overall and 1-1 in CIAA play. The team will return to action, Monday when they head to Ettrick, Virginia to take on the Virginia State Trojans.