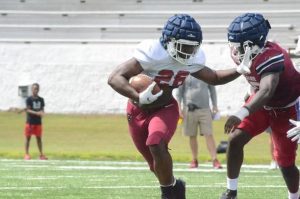 With less than two weeks before South Carolina State’s opener against Central Florida, the Bulldogs took to the field for their final preseason scrimmage Saturday in Orangeburg.

“I thought we made some strides offensively,” SC State head coach Buddy Pough said following the scrimmage. “I was expecting us to play a little bit better defensively, but we still have a few of our key parts on the shelf. We have to either get those guys playing or get their replacements playing better.”

“I thought Corey had a good day,” Pough said. “He’s starting to have a little pressure on him, Prometheus Franklin is at his back door. He’s the one running that second-team offense that’s giving our defense all that trouble. We got a situation where we have a really good young (quarterback) coming along.”

Kendrell Flowers returned to the field and took reps with the first team. Flowers led SC State in rushing last season but had dealt with an injury for most of fall camp.

“It feels great to be back on the field, competing with my brothers,” Flowers said. “I’m trying to get back in game shape so I can be the best version of myself and help the team get back to where we were last year.”

Pough said he was disappointed at the success the second-team offense had against the first-team defense.

“It was a little surprising,” Pough said. “There are still some unknowns on this team. I expect the offense to be a little ahead of where we were last year, but at the same time I don’t know if our chemistry is as good (as last year). We’re a little big-headed, and we have to get our guys to recognize the task at hand.”

“We have some things we have to clean up,” Saxon said. “With two weeks before the first game, I think we’re in a good spot. We’re developing some depth and getting guys ready to play. We’re excited about the first game; now it’s about putting it all together.”

The defense did force four turnovers including three interceptions. Jalen Barr and Aaron Smith each returned interceptions for touchdowns.

Pough said the Bulldogs will begin to game plan Sunday for the season opener against the Knights in Orlando. SC State opens the season Thursday, Sept. 1, at 7 p.m.

“We have a pretty good idea of what they do, but there are a lot of unknowns about these guys,” Pough said. “They have a new quarterback, a few new offensive linemen and some new defenders, so it’s like any first game of the season. There’s going to be some adjustments we have to make on the fly.”