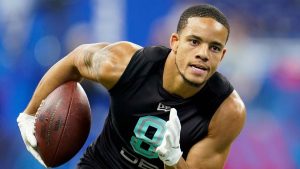 INDIANAPOLIS (March 8, 2022) — Willie Simmons has seen just about everything in his more than two decades in college football.

He spent three years as a quarterback at Clemson before extinguishing his eligibility at The Citadel. His coaching career has spanned 17 years, six schools and four different levels.

That time at the college level and, particularly, in HBCU football gives him a unique sense of perspective.

“(Society has) conditioned us to think that an HBCU education, HBCU athletics are an inferior product,” Simmons told The State. “And that’s such a big misconception, a big myth that we’re constantly trying to debunk.”

Each player’s paths to their respective schools varied, but they all fight similar stereotypes and stigmas throughout the NFL Draft process.

This week was a chance, as much as anything, to set the record straight.

Durant pointed to his game against Clemson last fall as proof of his ability. He picked off quarterback D.J. Uiagalelei twice, notched a pair of pass breakups and a trio of tackles.

During meetings with NFL teams this week, he made note of the Clemson game given Tigers’ skill sets compared to his usual meetings with Mid-Eastern Athletic Conference teams.

Durant further impressed scouts with his ability to draw up defenses on the white board, including defensive line and linebacker assignments. His 4.38-second 40-yard dash time — the fifth best time of the 31 cornerbacks that ran this week — didn’t hurt his cause either.

“I felt like a couple times I shocked teams by drawing the defensive line,” Durant said through a smirk.

Williams, who spent a year at Palmetto Prep to garner heavier recruiting interest after his high school career, drove hours and hours to camps around the country for exposure during his prep days. The same narrative repeated itself stop after stop. Teams told his coaches they liked what he brought to the table, but those offers never came.

Fayetteville State offered Williams his only real college chance. He took it and ran with it, recording 55 tackles, 22 passes defended and five interceptions over his 28 games played.

“We just tried opening a door,” said Freezy Smalls II, Williams’ former high school coach in North Carolina who was at the NFL Combine on Saturday. “And he burst through it just like he’s doing right now.”

Carter, too, had to do his share of convincing. The Louisiana product was a basketball player by trade in high school, averaging 17 points and 10 rebounds his senior season. He had a handful of offers to play on the hardwood at the next level, but sided with football.

Southern converted the prep tight end/defensive lineman into an offensive lineman upon arrival. Carter quips he remembers being cussed out his first practice in Baton Rouge as he was trying unsuccessfully to navigate his new position.

He eventually found his stride offensively, evolving into a three-year letterman and a second team All-Southwestern Athletic Conference selection in 2021. “It’s surreal,” Carter said of being in Indianapolis this week. “It still hasn’t hit me. I’m still processing everything. It happened so fast. It’s crazy, for real. I’m just blessed for this opportunity, and I’m just enjoying the process.”

Bell is perhaps the outlier in the group given he has some previous experience in big-time college football. Prior to landing at Florida A&M, he was a four-star prospect in the 2017 class. He spent part of his freshman season at Maryland before heading to Coffeyville Community College in Kansas.

But those inroads haven’t quite manifested at the NFL level yet. Zero players from HBCUs were selected in the 2021 NFL Draft. There were also only 19 HBCU players were on the initial 53-man rosters at the beginning of the 2021 season, according to HBCU Gameday.

“I witnessed a multitude of kids we played against that were more than qualified to be drafted,” Sanders wrote in an Instagram post after last year’s draft. “My prayers are that this won’t EVER happen again.
Get yo knife out my back and fight with me not against me!”

New Orleans Saints offensive tackle Terron Armstead (Arkansas-Pine Bluff) and Chicago Bears running back Tarik Cohen (North Carolina A&T) also played their college ball at HBCUs Simmons points to the Pro Football Hall of Fame as a reminder of the kinds of players who have come out of HBCUs over the years.

South Carolina State has more members of the Pro Football Hall of Fame than South Carolina or Clemson. The same can be said for Jackson State compared to either Ole Miss or Mississippi State. Morgan State even has more Hall of Famers than Maryland.

“Markquese Bell, Ja’Tyre Carter, Decobie Durant and (Joshua Williams) — they’re just the latest in a long line of successful, Black and Brown people who are going on to do phenomenal things in this country,” Simmons said.

The 2019 NFL Draft saw four players from HBCUs taken. Durant, Carter, Bell and Williams are all likely to be draftable prospects next month. Their showings at the NFL Combine are the first step toward that goal.

“I feel like we’re opening doors for the other guys at HBCUs,” Durant said. “No matter what school you go to, if you can play, you’re going to get this opportunity just like us.”